Topics available on this page:

The phenomenon can occur at all flight levels, however, it is particularly dangerous at low levels (from the ground up to approximately 2,000 feet in height), in the approach, landing and initial climb phases, due to the altitude limitation and time to maneuver of aircraft. At these times, the time for identification and retrieval is very short and sometimes in the order of a few seconds.

The wind shear can be mild, moderate, severe or extreme.

The Windshear Pilot Guide , made by the Federal Aviation Administration (FAA) presents  a review of accidents and incidents reported worldwide between 1959 and 1983, which were identified in 51 meteorological events related to windshear .

The events of windshear , subdivided by meteorological condition, are summarized below. 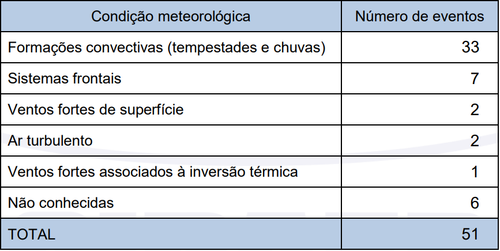 Convective formations (storms and rains) are good indications that there may be wind scissors.

When the descending reaches the ground, it spreads horizontally and can form one or more horizontal vortex rings. The spreading region typically has diameters ranging from 1 to 2 miles and the vortices can reach up to 2,000 feet in height. 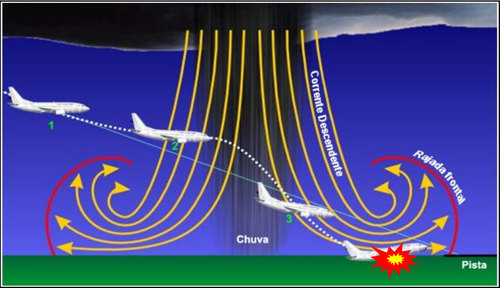 Effect measurements indicate that wind speed variations in microburst regions at their highest intensity are of the order of 45 knots. However, speed differences of almost 100 knots were detected in aviation accidents at US airports.

Due to the rapidity with which this phenomenon forms and falls apart, the passage through a microburst in the initial stage of its formation may not be significant for a pilot. However, the same situation, a few minutes later, can produce two or three times greater velocity variations. Downstream currents, at this stage, can force aircraft in landing or takeoff procedures to hit the ground or obstacles.

The entry of cold fronts can also cause windshear , albeit with lesser intensity. 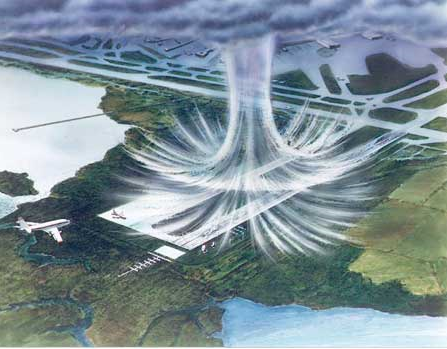 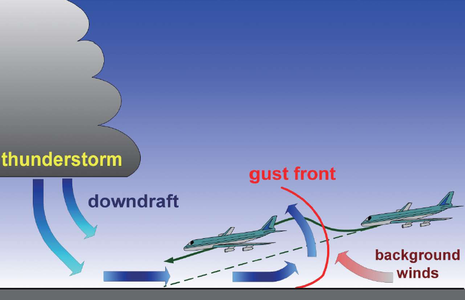 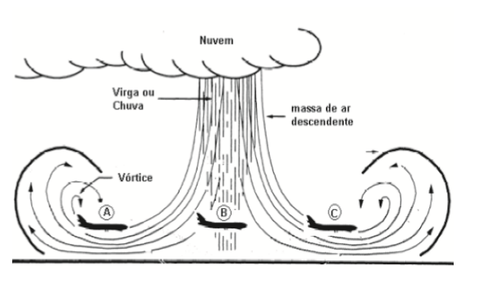 Wind scissors can cause different effects on aircraft such as turbulence, increased or decreased speed indicated, sharp variations in the reasons for descent and / or ascent, altitude and bow.

The main result of all these effects is loss of lift. 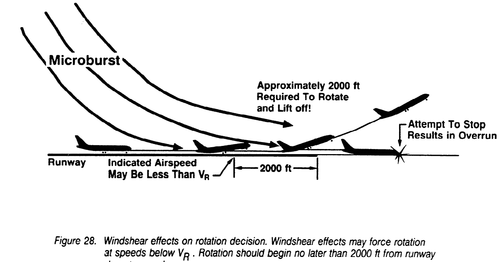 According to information from CENIPA, some accidents had a downward wind gust characteristic of windshear , which destabilized the aircraft during the approach to the landing and launched them against the ground.

If aircraft crash into the ground during landing, they may suffer substantial damage such as landing gear, wings, horizontal stabilizer, propellers, and engine. 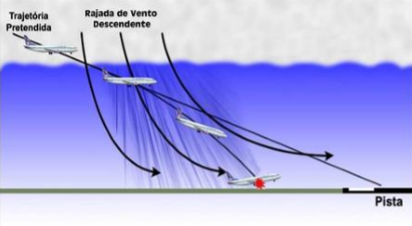 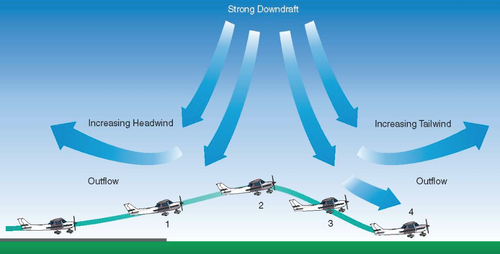 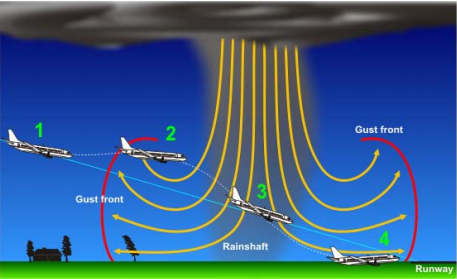 How to mitigate the danger

The best way to avoid encountering a wind shear is to have prior knowledge of the meteorological information of the destination as well as to check if any significant weather phenomenon has occurred or is occurring locally.

Usually the crews are alerted on the trends favorable to this type of occurrence.

The most up-to-date information that can be obtained about the Windshear comes from other pilots who routinely report such occurrences to air traffic controllers, although there are equipment capable of measuring wind cutters at aerodromes, such as so-called wind profilers.

From these reports, the information is codified and disclosed as follows:

- Example of wind shear at head 10

- This information can also be disseminated through the Aerodrome Warning message 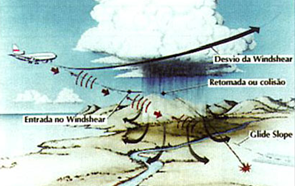 Note 4-1
If the aircraft is subjected to the effects of a wind shear, a countermeasure is to apply maximum power to the engine (s) and to execute a rush in the air.

The degree of risk represented by the phenomenon must be correctly evaluated and managed by the pilot, should he decide to continue the landing procedure under Windshear conditions . As a result of this factor, the performance in the aircraft commands must be efficient in order to avoid the violent impact of the aircraft against the ground.

Note 4-2
The realization of a rush in the air and a new traffic circuit or the continuation of the flight to the alternative aerodrome would be the most appropriate lines of action under Windshear conditions .

Note 4-3
If the pilot is surprised and can not make a rush, the recovery maneuver should focus on maintaining the aircraft's trajectory.

Some aircraft have EGPWS ( Enhanced Ground Proximity Warning System ), an equipment capable of alerting the crew when the aircraft is under the effects of a Windshear .

In the flight planning phase, the occurrence of wind shear at the departure aerodrome or at the destination aerodrome can be identified by consulting weather reports.

The phenomenon was mentioned in the investigation reports of the following accidents / incidents:

**Notes containing items of Brazilian regulations have not been translated so that their interpretation is not different from the intended interpretation.

Did you find errors in this content ? Send email to meteorologia@anac.gov.br to report.