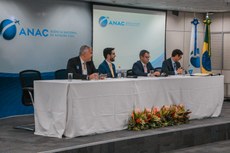 The Aviation Working Group (AWG) in association with the National Civil Aviation Agency of Brazil (ANAC), with the support of the International Civil Aviation Organization (ICAO) and the International Institute for the Unification of Private Law (UNIDROIT), hosted a major  Latin American regional event on the Cape Town Convention and its Aircraft Protocol (CTC) and cross-border transferability of aircraft (XBT) on 25 and 26 June 2019 at ANAC’s Headquarters in Brasilia.

The event detailed and assessed the economic and legal benefits of the Cape Town Convention and its Aircraft Protocol, with emphasis on the interpretation, implementation, and compliance with its provisions. AWG encouraged the ratification and effective implementation of the Cape Town Convention and indicated its willingness to work closely with Latin American countries that are seeking these benefits of the international instruments. Attendees to this event included important Latin American civil aviation officials, Latin America-wide airlines, manufacturers, lessors, export credit agencies, and leading legal practitioners in the region.

In addition, several sessions were dedicated to addressing ICAO’s new activities on the cross-border transfer of aircraft (XBT) and its importance to the aviation sector. The success of the event will be built upon through close cooperation among Latin American Aviation Authorities, airlines and leading practitioners in the region.

Mr Jeffrey Wool, the Secretary General of the AWG, thanked ANAC for their support and mentioned:

“We addressed the highest standards applicable to compliance with the Cape Town Convention, providing economic benefits to the Latin American airlines and the region. We also covered the development of enhanced rules and practices relating to cross-border transferability, promoting the efficiency of the air transport system while maintaining the highest safety standards.”

Mr. Juliano Noman, Director of ANAC mentioned: “(...) our countries must work to foster a reliable market environment, in which aircraft leases are less risky and, therefore, can be subjected to lower rates - - and in which the cross borders transferability, that is inherent to this context, can be carried out in a fast and straightforward manner.”