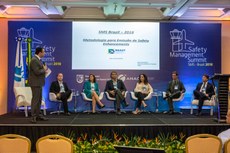 The Brazilian federal capital hosted the third edition of the Safety Management Summit (SMS Brazil) held on December  6 and 7. The date of December 7 is officially recognized as the International Civil Aviation Day by the United Nations General Assembly since 1996. For this reason, the date was chosen to hold the event promoted by the National Civil Aviation Agency (ANAC) and by the Department of Airspace Control (DECEA).

The event was opened by Director Hélio Paes de Barros representing ANAC, Brigadier Felipe, from the Center for Research and Prevention of Aeronautical Accidents (CENIPA) and the Deputy Director of DECEA, Major Brigadier Leônidas. The Director Paes de Barros highlighted how SMS can contribute to guaranteeing and improving safety in civil aviation. "It is important to continuously share experiences among civil aviation system operators in maintaining and improving the levels of safety to be achieved," he said.

The SMS counts on the participation of speakers from the national and international civil aviation community. Among the international presenters are Christine Negroni, an American author and author of the book " Aviation Detectives: Investigating The World's Most Mysterious Air Disasters"; Jeffrey Phipps, from the Canadian Civil Aviation Authority (TCCA); and Heather Owen-Perry from the American airline company Delta Airlines.

On the last day of the SMS, ANAC announced the winners of the InovANAC Safety Award. The prize, which is an initiative to stimulate the culture of innovation in civil aviation, was divided into three categories: Aerodromes, Air Operators and Airworthiness. To see the winners of each category, visit the InovANAC Award Page (available only in Portuguese).